Interpretive Authority and the Kelsenian Quest for Legality 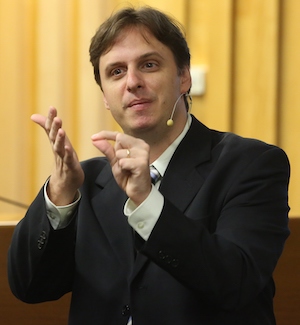 David Dyzenhaus argued in the last paragraph of The Long Arc of Legality that, except for the rare cases where there is a need for a revolution, “our moral and legal lives are completely and utterly intertwined.” (P. 422.) But this apparently radical endorsement of natural law theory is nuanced because Dyzenhaus has only a pragmatic morality in mind. In agreement with Hart, he rejects the assumption that legal philosophers should choose between the metaethical positions of moral realism and emotivism (P. 370) and suggests, instead, that the law is a kind of “laboratory for the testing of moral ideals.” (P. 387.)

A distinctive and interesting part of Dyzenhaus’s contribution is his explanation of how that pragmatic morality relates to law. To understand the law’s authority, Dyzenhaus puts legal subjects, instead of officials, at the center of legal inquiry. Jurisprudence’s “first question” becomes the question that legal subjects are entitled to ask from the legal system’s internal point of view, that is, the question “But, how can that be the law for me?” (P. 2), which Bernard Williams described as the “Basic Legitimation Demand” of any political society.1 A modern state must satisfy that justificatory requirement because that is what shows that such state “wields authority, rather than sheer or unmediated coercive power, over those subject to its rule.” (P. 213.)

An equally important element of Dyzenhaus’s construction is the “constitutional idea” that there is an “ongoing practice which constitutes legitimate authority” by means of the “voluntary interaction of the very subjects who are subject to that authority.” (P. 3.) Dyzenhaus turns to Hobbes’s social contract to justify this point. Nevertheless, he emphasizes a frequently neglected aspect of the role of officials in Hobbes’s Leviathan, which is the interpretive role to maintain both the civil order and the “mutual relationship of protection and obedience” that are constituted through that contract. (P. 6.) The “first question” of jurisprudence, adduced above, is constantly reiterated and must be answered to every subject, in every act of legal creation and application of juristic norms.

Dyzenhaus believes we should put to the side the question whether there is a necessary connection between law and morality and concentrate our efforts, instead, in developing a dynamic theory of law. The fundamental debate within jurisprudence is “neither between legal positivism and natural law theory, nor between theories of law and theories of adjudication”, but rather the divide “between static theories of law, as espoused by Bentham, Austin, Hart and Raz, and dynamic theories, as espoused by Hobbes, Kelsen, Radbruch, Fuller and Dworkin.” (Pp. 22-23.)

This brings us to a crucial disagreement between Kelsen and Hart. The problem of Hart’s Separability Thesis, for Dyzenhaus, is that it presupposes a static conception of law. Hart’s objections to Kelsen’s epistemological principle of unity – that prevents one from accepting a conflict between a legal and a moral norm, or between a municipal norm and a norm of international law – “missed entirely the most important dimension of Kelsen’s legal theory” (P. 20), which is the fact that such theory includes an account of the “dynamic process of legal change”, instead of remitting these changes to an exercise of discretion in an “extra-legal space.” (Id.)

While Kelsen’s legal theory is a dynamic theory that explains the legal ways in which officials perform their task to interpret and develop the law, Hart’s jurisprudence has little to say about legal interpretation. On Kelsen’s hierarchical structure of legal norms, “law regulates its own creation inasmuch as one legal norm determines the way in which another norm is created, and also, to some extent, the contents of that norm.”2 When we consider the details of this interpretive claim, we can appreciate another important difference between Kelsen and Hart. Legal interpretation, for Kelsen, is partly determined by the “juristic” values embedded in law,3 which Dyzenhaus–contrary to Kelsen’s self-understanding (x)–interprets as the “principles of legality” that constitute the “internal” morality of law, in Fuller’s sense (P. 316.)

Hart’s jurisprudence, in turn, upholds that in every legal case there is either a rule with a determinate legal content, or a penumbra space where a legal change is required, so that inside that space the judge is “not doing anything different from legislators” who resort to an external morality in order to modify the law. (P. 219.) Hart’s account of judicial discretion becomes, therefore, vulnerable to Austin’s “biggest mistake,” (P. 20) which was to treat the “law as a system of rules complete and ready for application, without regard to the process of their creation.”4

Perhaps a traditional legal positivist will be unhappy with these thoughts, because Dyzenhaus ends up finding more connections between Kelsen and Dworkin than one could ever find between Kelsen and Hart. According to Dyzenhaus, Hart was wrong to accuse Dworkin of trying to undermine a theory of law by offering only a theory of adjudication that stands in a different level. That accusation fails, Dyzenhaus argues, precisely “because Dworkin, like Kelsen, argued for a dynamic model of law.” (P. 248.) Part of the task of a dynamic theory of law is to explain how the law regulates its own creation, including by means of adjudication. “For Kelsen the conflict [between municipal law and international law, or between law and morality] arises only if one adopts the static conception of law,” because on the dynamic model the legal order itself provides the procedures and the interpretive principles that allow this conflict to come to an end. The epistemic principle of unity, which underlies Kelsen’s postulate of a basic norm that allows us to interpret a set of authoritative pronouncements as constituting a single system,5 establishes a requirement of consistency and determines the “specific function of juristic interpretation,” which is to “eliminate these contradictions by showing that they are merely sham contradictions” once the law is understood in an intelligible way.6

The best place to look for Dyzenhaus’s pragmatic morality, therefore, is inside the law, in the “principles of legality” that discipline the way in which political power is transformed into law. The law makes a moral difference in our lives not because it mirrors a pre-existing external morality that must be reflected in its norms (or, perhaps, a personal morality that a good-faith interpreter might wish to project into the law), but because it establishes processes for mediation between authorities and legal subjects, whereby “political judgments are converted into legal content.” (P. 3.)

The principles of legality play, in this dynamic process, a double role, which corresponds to two different “Kelsenian ladders” in the law’s hierarchical structure (or, if you want, two different aspects of the same ladder). As Dworkin explained in an early comment on Hart’s critique of Kelsen’s doctrine of the unity of law, Hart presents a question-begging response to Kelsen, when Hart objects to Kelsen’s requirement of consistency among different norms. Kelsen’s argument against normative conflicts should not be treated as a strictly logical argument, because that argument is not a descriptive statement of the kind an external observer asserts while purporting to report the content of a given norm,7 but rather a statement within the “dynamics of legal reasoning” that purports to make a conclusive statement “that some man or some official ought to do something,” all things considered.8

It is this Dworkinian insight that inspires Dyzenhaus to develop the metaphor of two different Kelsenian ladders. The content of a norm must be justified both because the enactment of such norm is “legally authorized” and because it “fits within the unified field of legal meaning made up of substantive as well as formal norms” (P. 258.) In other words:

Besides the ladder of formal authorization there is what we can think of as the ladder of material concretization. When legal officials exercise their formal interpretive authority, they are also giving further content to the norm or norms they are interpreting, which requires an act of creative judgment. But, while creative, the judgment is constrained by the requirement that its content is understandable as a norm within the unified field of meaning. (Id.)

One of the roles of Kelsen’s basic norm, for Dyzenhaus, is to provide an epistemological norm that not only instructs officials on how to create a law, but establishes also an intellectual requirement to understand it in a meaningful and intelligible way. As Kelsen has put in a relatively early essay, “if the system of positive legal norms, reared upon the basic norm, is to be a meaningful whole, a comprehensive pattern, a possible object of cognition in any sense…then the basic norm must make provision for it”.9 To establish the validity of a legal system, the basic norm must contain a principle of non-contradiction and a set of “principles of interpretation” to determine how to understand the law.10

By focusing on this aspect of Kelsen’s theory, Dyzenhaus departs from a central assumption of an influential interpretation of Kelsen in contemporary jurisprudence, namely the “weak reading” of authority, which claims that law’s authority is primarily addressed to legal officials.(P. 163.)11 If Dyzenhaus’s interpretation of Kelsen is right, it is the other way round: Kelsen’s theory of legal authority should be interpreted according to the strong reading of authority, because it places the “legal subject” in the “front and centre” of any authority relationship. (P. 164.)

Furthermore, the basic norm plays not only the role of explaining the seemingly evident fact that the constitution – if we consider only the validity of a municipal legal system – is legally valid (Id.) It performs, in addition, an interpretive function because it allows us to establish the right way – instead of only another way – to interpret and understand the content of law. By allowing us to understand the law as a dynamic system, which is conceived of as a gapless system, it assumes a principle which governs the way in which we interpret the law and explains how a polity is “governed in accordance with the rule of law in that law regulates its own production and all legal problems are solved in a dynamic law-governed process.” (P. 166.)

I think that Dyzenhaus’s Kelsenian account of interpretation, legal authority, and political legitimacy is very successful. Dyzenhaus’s book is a masterpiece. There are few works in contemporary legal philosophy that match its standards of quality and innovation. Dyzenhaus’s book combines the virtues of originality and insight, which are typical of authors like Dworkin and Raz, with the equally important virtues of discipline, sensitivity to historical context, interdisciplinarity, and generosity in the interpretation of other authors, which mark the works of Postema and other scholars.

You might find Dyzenhaus’s opinions unorthodox and distant from Kelsen’s original insights, and perhaps you are right about that. In effect, Dyzenhaus explicitly claims that “Kelsen’s theory cannot remain “pure”, or at least not pure in the way he understood this attribute, that is, as apolitical”. (P. 418.) But I suppose that, as a pragmatist, Dyzenhaus probably wouldn’t mind. After all, Dyzenhaus interprets Kelsen’s theory in the same way that a pragmatist would interpret our political morality or, perhaps, the internal morality of law, that is, by making explicit the implicit commitments of such morality (P. 386) and eliminating incompatible assumptions therein. (P. 387.)12 This pragmatic yet non-instrumentalist method of legal interpretation is one of the most promising candidates to overcome the current deadlock between natural law and legal positivism (P. 1), that seems to prevent the possibility of progress in the legal philosophy of our time.